The objectives of the Claise Brook Catchment Group are:

History of the Group

We formed in late 1997 following a public meeting called by Diana Warnock MLA. The meeting reflected community concerns over algal blooms in Perth's wetlands and the lack of wetland habitat in the inner city . Meeting participants also gave support to the development of a Vincent Greenway.

The first meeting of the group was held on 9 December 1997 at which the focus issues of water quality, community education, a Greenway Plan for the Catchment and stormwater management were adopted. Since then the group has met regularly and undertaken a number of significant projects in the inner city area while also contributing to the consultative process for planning and development issues pertinent to the group's objectives. The group was officially incorporated on 15 January 1999.

Since forming, CBCG has established partnerships with the Water Corporation, City of Vincent, City of Perth, East Perth Redevelopment Authority and the Swan River Trust among others. These partnerships have led to a number of successful projects including:

The group has supported a range of initiatives to raise awareness of the connection between fertiliser use and nutrient enrichment of the Swan River under the banner of Catchment Friendly Gardening and Grow Local Plants.

Origin of Our Name

The catchment group is named after "Claise Brook" which existed as a free flowing stream until the 1990s. Claise Brook no longer exists as a natural waterway and the major features named after Claise Brook, such as the train station and the cove are called “Claisebrook”. Even the catchment itself is based on a drainage system around a Water Corporation Main Drain which is called the Claisebrook Main Drain.

While the stream has been highly altered and now divides into an underground drain discharging directly into the Swan River and a highly modified system where the drain water is pumped uphill to emerge from the back of a tortoise sculpture from where the water flows down an artificial channel, there is still a possibility of restoring aspects of the natural Claise Brook watercourse in the future.

Retaining the original name reinforces the notion that we are a group working in a water drainage catchment, however altered, which does or could contain natural features such as wetlands and streams and which shares the same issues as any catchment, including the impact on water quality in receiving waters, in our case the Swan River.

The historic connection with the former wetlands and streams, most of which no longer exist, is a significant source of inspiration to the catchment group and an important means whereby we gain the interest and attention of the community.

Our logo features a sedge-lined stream meandering between wetlands with the Perth city skyline in the background. It was designed by Simon Boyd Media Production.

Funding from the Swan River Trust through the Drainage Nutrient Intervention Program supports initiatives to liaise with stakeholders to improve water quality in the catchment surrounding the Mounts Bay Drain. Swan River Trust funding also assisted in the preparation of this website.

The City of Perth provided funding for tours and on-ground activities to give city residents and workers an opportunity for hands-on involvement in urban Landcare.

The Water Corporation sponsors the prizes for the Catchment Friendly Garden category in the City of Vincent Annual Garden Competition.

The development of the Grow Local Plants Strategy was supported by a grant from the State Government through the State Water Strategy.

The Claise Brook Catchment Group thanks all our sponsors for supporting works to improve water quality in the inner city catchments.

The group makes submissions on issues of concern in the area. Click here to read our recent submissions.

To read newspaper articles about our activities visit the News page.

Anyone with an interest is welcome to attend our bi-monthly meetings or join us on any of our activities. There is no membership fee. Volunteering is a rewarding experience where you can meet new people, share your knowledge and skills and most importantly have fun! 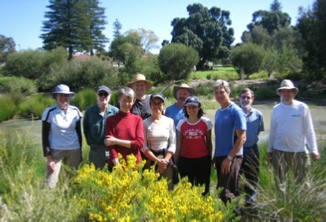 The Group's activities take place within the catchments of the Claise Brook Main Drain, the Perth CBD catchment which includes Perth City and Lake Monger, and the smaller Walters Brook Catchment in Highgate/East Perth. Map

Some of our members at Robertson Park. September 2008. 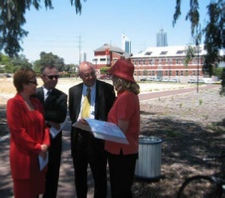