The present form of the Claise Brook Catchment bears little resemblance to that of 1829, the time of European Settlement. Much of the catchment was once an extensive system of lakes and swamps from Lake Monger in the west to Claise Brook in the east. Many of the lakes and swamps were interconnected during the wet season and drained into the river through Claise Brook.

Today’s catchment is around 15 square kilometres in size, being about 3 km in width and approximately 7km from north to south. Lake Monger is now part of a separate surface drainage system, but is affected by groundwater movement from within the Claise Brook Catchment.

Most of the former surface water features have disappeared, and the remainder are much altered to form artificial lakes along the drainage lines. Parts of the drain intercept and drain high water tables and can flow all year round, increasing the potential to transport nutrients and contaminants to the river.

Residential use is the dominant land use in the Claise and Walters Brook catchments and is likely to be an important source of stormwater pollution, particularly nutrients from garden fertilisers and pet faeces. Parks and recreational areas are found throughout these catchments and potentially could contribute contaminants as a result of pesticide and fertiliser application.

There are a wide variety of uses within the commercial areas, and problems may arise from incorrect waste disposal. This could result in a cumulative effect on water quality in the catchment, particularly from restaurants, cafes and hotels.

While the catchment historically included many industries, this is now a minor land use occupying only 3.7% of the catchment area.

The inner urban areas were formerly Perth’s first industrial areas, particularly around East and West Perth, and also North Perth. The trades included metal processors, auto and related trades, timber trades, printers and public utilities. These trades involved the use of a number of harmful contaminants which may persist in soils and groundwater including trace metals, acids and alkalis, solvents, hydrocarbons, pesticides, phenols and ammonia compounds.

To assess the degree to which past land uses may be compromising catchment and river health due to soil and groundwater contamination, in 2000 the group commissioned Jeanette Conacher to prepare a report on the historic land uses within the Claise Brook Catchment. This was funded by a grant from the Swan River Trust.

The “Historic Land Use Survey of the Claise Brook Catchment” identified a number of sites or zones within the catchment which are considered at high risk for soil and groundwater contamination. This is based on land uses with high pollution risk and where the past activities have been large-scale, enduring or known polluters. The report strongly recommended in-situ soil and groundwater monitoring at 12 sites.

The report also identified a number of sites with a pollution risk relating to nutrients, including diffuse sources from parks and gardens and point source from historic landfill and nightsoil sites.

More recently concerns have been raised about possible acid-sulphate soil problems in areas within the former wetlands.

Click the image to see a more detailed map. 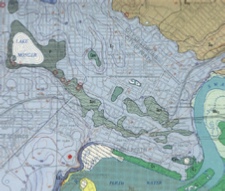